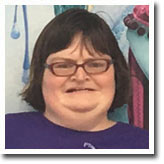 On Monday, March 14th, I left with Ashley to head to Logan Airport for our trip to Disney to celebrate my 30th birthday. I barely slept the night before I was so excited. Fred drove us to the airport and we flew down to Orlando; we were able to watch TV on the plane which made the flight a lot easier. When we got off the plane, the Disney Magical Express took us to the hotel we were staying at (Pop Century Resort). It was hot in Florida, so we changed into shorts and went right to the Magic Kingdom. We went on a ride that I had been on before (Thunder Mountain), then ate dinner and went on the Small World ride, one of my favorites. After that, we watched the fireworks at Cinderella’s Castle from the Mickey Garden.

Our second day we went to Epcot Center where I met Mickey Mouse, Minnie Mouse, and Goofy; that was so fun! We also went on my favorite ride, the Test Track ride. We made a purple truck with wings and tested it on the track, and our truck came in second place! After Epcot, we went back to the hotel for a nap and dinner, the food at Pop Century was so good. That night we went to Hollywood Studios. We went to a Frozen sing-along. Frozen is my favorite movie so I was singing all the songs really loud, especially, Let it Go. It was so much fun. We watched the Muppets 3D, Beans Bunny was really cute, and I saw the two old guys sitting in the balcony. At the end of the night, we went on the Tower of Terror. I was nervous because I had never gone on that ride before and it was a scary ride. I did it and I am happy I did. It was awesome and I made some friends who told me how brave I was. When we got on the bus to go home, a lady from Texas saw my pin that said it was my birthday and she got the entire bus to sing Happy Birthday to me. I was so happy. 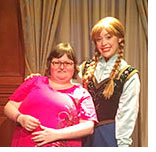 On Wednesday, we went back to Hollywood Studios for some shopping and then to Magic Kingdom to spend the rest of the time there. Magic Kingdom is my favorite. We sat down for a while and did some people watching; people watching in Disney is fun. At Magic Kingdom, we went on the Ariel ride and that was fun. You had to get on a conveyer belt to get on the ride, it was funny. After that, I met Elsa and Anna from Frozen, they were so nice. Anna and I made a snowman with our hands. The last stop of the night was to meet Belle from Beauty and the Beast. It was story time with Belle, and I got a signed bookmark from her.

Thursday was our last full day in Disney. We started at Animal Kingdom, where I met Baloo and Louie from the Jungle Book, they gave me a huge hug and I was so happy. Then we met Doug and Russell from Up, they were funny. After we met the characters, we ate lunch at the Rainforest Café, that was so fun; there is a huge fish tank there and lots of animals. I had a really good cheeseburger and the best piece of cheesecake ever. After lunch we went on the Safari ride and our safari driver was from Boston, that was fun. We saw elephants, giraffes, and an ostrich that was really close to the truck protecting her eggs. That night we went to Disney Springs for more shopping and I bought a Lady stuffed animal from Lady and the Tramp.

The last day was sad because I had so much fun while I was there but I was excited to come home and tell all my friends about all the fun I had. My dreams really did come true. It was a really fun time and I can’t wait to go back.